Home Positive News These Students Built an Epic Baby Stroller for a New Dad in... 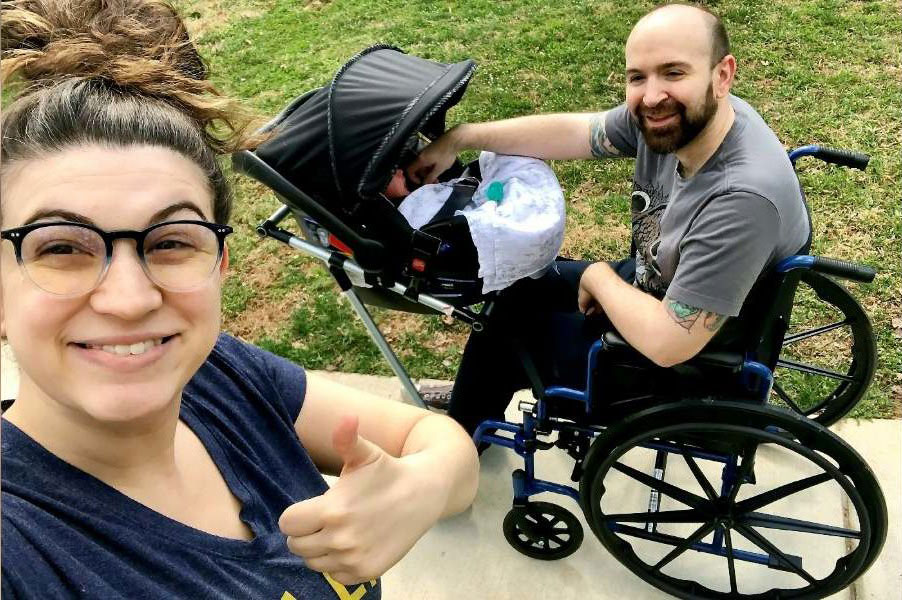 A group of school kids have made a special wheelchair stroller so a wheelchair-bound dad can take his newborn son out for a walk.

37-year-old Jeremy King has suffered impaired mobility since an operation that removed a brain tumour in 2017.

When the pregnancy was revealed, he was concerned how he would manage to help his expecting wife Chelsie after she gave birth.

Chelsie, a teacher at Bullis School in Maryland, recruited the help of her students who designed the catchy named WheeStroll—a child seat that attaches to a wheelchair.

Just a few weeks after the couple’s son Phoenix was born, Jeremy has already taken him out for walks with the pram-wheelchair hybrid.

Jeremy said: “I was emotional and elated because something like this really increases independence with my child.”

“It has allowed me to experience things that I would not have been able to do before having the WheeStroll. It allows us as a family to have more freedom of movement.”

Chelsie has been incredibly happy with the extra bonding time this has provided Jeremy and their baby, stating: “Being able to see Jeremy have some independence with our son is a gift.”

“This surgery changed our lives drastically and we have worked very hard to accept, learn, and overcome those challenges but parenting is a whole new set of challenges.”

“It has given us the ability to do something simple like take a walk as a family; something that a lot of families don’t have to think twice about.”

Just three months after their engagement, Jeremy underwent the eight-hour surgery to remove the brain tumour that resulted in his impaired mobility.

He said: “I was very concerned with the safety of myself and our child especially with Chelsie having to potentially support both of us.”

“It played on my mind constantly which is why it was important for us to find things to help.”

The couple tried searching for a product to help Jeremy, but with no luck Chelsie recruited the help of her colleague, innovation and technology lab coordinator Matt Zigler.

She asked him if he and his students could design something to attach to Jeremy’s wheelchair to allow him to hold their child while on the go.

Chelsie said: “He had the idea to throw this to his ‘making for social good’ class and I thought that was an amazing idea.”

The school kids conducted interviews with the family and the fire department, who provide infant car seat installation training.

The school team purchased or 3D printed all the parts required, and even borrowed a wheelchair from the school nurse as a prototype.

Jeremy, who works in administration, said: “It was a very emotional experience because I never thought I would be able to do something safely like taking a walk with my child.”

The WheeStroll was completed ahead of schedule and before the baby’s birth on March 4 this year and, so within a few weeks Jeremy was already able to take baby Phoenix for a walk.

“We hope that people will see this story,” Jeremy said, “and know there are ways around their challenges and can build this for themselves at a low cost.”

“I want to personally thank the students for taking my situation into account and developing this amazing device.”

(WATCH the video for this story below.)